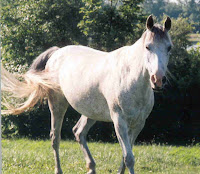 Many Thanks to Cindy Stafford for allowing Zoey to be available as a Fantasy Horse in our stable.
Posted by Becky Burkheart at 9:42:00 AM