Landroval is a striking wild bay, with a glistening deep, red coat and the typical shining dark mane and tail, but without the high black socks most bay horses have. Instead, his legs are shaded, darker toward the hoof and only shadowed up toward the knee. He has an even more unusual trait - dusted up the front of his front cannons, a sprinkling of fawn colored hairs that shimmer golden when the light catches them. With his atypical coloring and splashy white face and socks, he wouldn't be a good choice for someone who needs to remain inconspicuous because he is definitely an attention-getter and easily recognizable. 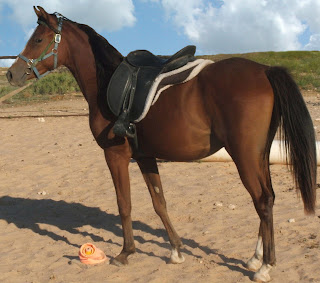 Landroval is a very kind and loving young horse, but not very brave. He would be a better choice for a courier than a knight. He's fast and very athletic, as well as quick-thinking, and might serve well as a mount for an assassin, although he's elegant enough to be an excellent choice for a traveling minstrel or even a lord's daughter.

His worst habit is an affectionate nuzzle that proceeds a nip. His long-time companion has been a cantankerous donkey and so he sometimes exhibits a propensity to want to play rough. While he needs gentle understanding to nurture his generous nature, he is still young and needs a firm hand to guide him in remembering polite behavior.
Posted by Becky Burkheart at 8:50:00 PM 1 comment: 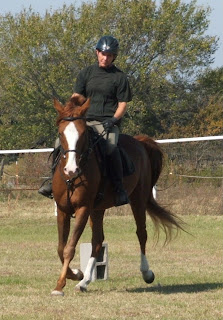 Glamdring is a big solid chestnut gelding with a heart as big as the world. He has a big splash of a star and a wide strip and snip that gives him a white nose. He has high socks on the back, a short sock on his right front and just a little dab of white on his left front that you can see from the right, but not if you're standing on his left side.

The first son of a lead mare, he'll take advantage where he can, but he's very happy to tuck in and "yes, ma'am" and "no, ma'am" when you call him on it. 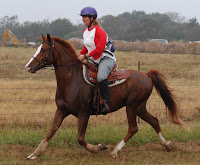 He's a well-trained, well-rounded athletic, suitable for any level of rider and would be an excellent choice for a hero who's headed out on a quest. He has a big engine and will go all day at a smooth, steady pace that won't wear out the rider. He loves to jump almost as much as he loves to run, he's even been known to jump out of his corral.

Glamdring's most infuriating fault is that he loves to rub his head and has learned to scratch his bridle off. The biggest problem with that is that he's likely to hang it on something, a tree-branch or a fence post, or if you're mounted, he'll rub it off on his knees and you have to dismount to fasten back on properly.
Posted by Becky Burkheart at 8:53:00 PM 1 comment:

Labels: arabian, BLUE STAR, chestnut, gelding, horse for sale, horse photos, how to write horses, mature, writing horses
Newer Posts Older Posts Home
Subscribe to: Posts (Atom)
We have several hundred horses on the list to be added, so please bookmark us and check back. If you don't see a horse that fits your current needs, please email. If we don't have one down the list, we can help you create a new one.