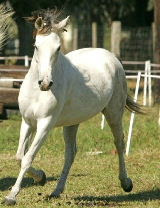 Named after the famed sword of legend, her name means "Flame of the West" and is significant in that, as the sword was reforged from an ancient weapon, so she continues the line of war-mares brought out of the desert.

Description: Anduril is a pale dappled silver mare with large dark eyes and silky black mane and tail. Her coat is mirror shiny with dense, feather soft hair. Her black hooves are hard as stone. She had a white stripe down her face as a youngster, but it is fading into the silver grey of her face as she ages, leaving a bit of pink on her nose. Her large expressive eyes drink in her surroundings, with long eyelashes and elegant black markings around the eyes. When excited by the chase or scouting ahead of the main party, her wide nostrils open like flower petals. Her ears are mobile and delicately pointed, a mirror of her thoughts. Her legs are solid and strongly muscled, her back exceptionally strong and coupled with her huge hindquarters, she is easily enough mount for the heaviest armored knight. She moves with amazing economy of motion, never a wasted step at any speed, saving her remarkable strength for the coming battle.

Training and experience: Anduril is an accomplished war-mare. In the stable, she is as gentle as a lamb with her handlers, but turns instantly into a dragon of fierce rage if irritated by disrespect or denial of her needs. Anduril is not the mare to use on a scouting expedition unless you are sure you will see action at the end. Her best use is either on a raiding party, where her blood-thirsty ways will greatly enhance your chances of returning home with great honors, or on the front lines of the main formation, where her unconquerable spirit will be an inspiration of the lesser beasts.

Anduril demands a knight equal to her own talents in battle, and will become angry and hard to control under an incompetent rider. She loves children and will gently care for them in the ring or on the trail, and she can be ridden by lesser riders on long journeys, but her competitiveness must be carefully managed by the herd-master to insure she doesn't cause undue trouble in camp and on the trail.
Posted by Becky Burkheart at 8:39:00 PM 3 comments: 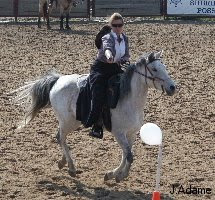 While she's fully trained in the arts of war, Beri was, unfortunately, 'pet-raised' by a family with young children who doted on her. As a result, she tends to exhibit a rather fallible sense of humor at inappropriate moments.

Most unfortunately, the children kept treats in their pockets and Beri will constantly nudge and sniff anyone (peasant or king) standing near, even to the point of lipping and tugging at their clothing. She's also prone to search any packs and bags left in her reach, either digging at them with her hoof until the contents are scattered or by nipping the bag in her teeth and tossing her head. She'll go quietly for an unsteady rider, and is unflappable in most cases, but woe betide the seasoned warrior who gives her a moment of inattention. She's accustomed to voicing her opinions on issues that are primarily the riders decision.

Of prime concern to her is the speed of travel, she 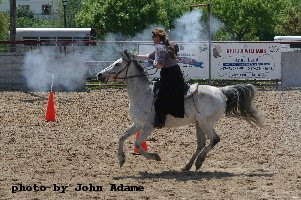 much prefers a high rate. If forced to travel too slowly, she'll hang her lower lip, droop her ears to the sides, lower her eyelids as if sleepy and slow her steps, dragging her toes and working in the occasional stumble. Her preferred pace is the gallop and she embraces the wind with great exuberance, athleticism and the occasional hop and buck worked in between strides.

If the rider chances to choose the 'wrong' trail (according to her infinite wisdom), she'll show her displeasure by slowing and finally coming to a sullen and immoveable halt.

Beri is changeable, as mares are prone to be, and is known by different names according to her mood. We have AngelBeri and EvilBeri and on occasions when she's being more like herself than usual, we recognize that she's being VeryBeri.
Posted by Becky Burkheart at 7:14:00 PM 1 comment:

Labels: arabian, BLUE STAR, cmsa - cowboy mounted shooting, grey, horse photos, mare, mature, writing horses. kid horse
Newer Posts Older Posts Home
Subscribe to: Posts (Atom)
We have several hundred horses on the list to be added, so please bookmark us and check back. If you don't see a horse that fits your current needs, please email. If we don't have one down the list, we can help you create a new one.