Her name means "Black Beauty" and she well-proved her inner strength and beauty shone as bright as her glistening coat and strong legs.

Description: Morivanya is a shining black mare with a pure white star on her forehead and a long snip of white that runs down between her nostrils. Although she’s tall enough for any rider but the tallest of Elfs, her proud beauty is such that a generous man will be compelled to gift her to his lady when he sees the sparkle in her eye and hears the catch in her breath as she reaches out her hand to stroke Mori's silken mane.

Training and experience: Morivanya is trained for battle. She’s light on her feet and has a nimble mind as well. It’s unusual to find such a strong battle spirit in a mare that has an otherwise kind and gentle nature, but the love of her rider, and their people, come through in her eagerness to charge into the fray. She’s quick to dart or lunge as needed to help her rider in the use of the lance and sword, but her eagerness and excitement make her less of a choice for an archer. 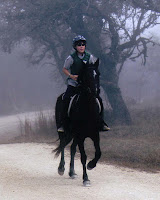 Although she’s an obedient mare, responsive to the touch of her rider’s leg and the lifting of the rein, she’s not recommended for a timid or new rider because her speed and great love of the chase typically put her to the fore of a charge. While she’s a fine choice for any experienced rider to race the wind for the sheer joy of the run, she needs a bold captain at the rein who can take full advantage for the kills when she brings him to the heat of the battle.


Mori's unstinting love and loyalty, unfailing courage and selfless nobility, in the end, became her downfall.

On a tragic moonless night raid, she burst up through the ranks, charged to the fore of the patrol and threw herself into an enemy trap, revealing a foul ambush, in order to save her companions. She suffered greatly yet without rancor as her sacrifice bought the escape of two young princesses and a matriarch of their house. Love of her fills our hearts and the pain of her loss is with us daily.
Posted by Becky Burkheart at 8:18:00 PM 1 comment:

Labels: arabian, black, BLUE STAR, horse photos, mare, mature, writing horses
Newer Posts Older Posts Home
Subscribe to: Posts (Atom)
We have several hundred horses on the list to be added, so please bookmark us and check back. If you don't see a horse that fits your current needs, please email. If we don't have one down the list, we can help you create a new one.